I have been on the Tay all week and seemed to have missed another good week on the Eden!

It has been an excellent week for Eden salmon anglers with fish reported caught as far upstream as the Eden Hall Estate. At Kirkoswald on Saturday Mel Cooper landed a brace at 8 and 10lb. Downstream the Low House Estate waters Armathwaite beat produced a 10 pounder to a Flying C in Linkey for Julian Shaw. Similar tactics in the Tail of Linkey saw Alan Sefton land a 10 pounder. David Garfoot landed a brace; a 14lb on a Rapala in the Bathing Pool, his second at 12lb took a Cascade fly in Linkey. YFF’s Peter Jones landed a fly caught 10 pounder in Linkey. Jim McKay caught a 9 pounder in the Bathing Pool on a Flying C. On the Low House beat Alan Lawrence landed a 10 pounder in Leastrum using a Flying C. Jim McKay also had a 10lb fish in on a Rapala in Toby’s Hole. Dick Bradshaw used a Cascade fly, catching a 12 pounder in Nichol Hole and Low House keeper Philip Taylor landed a 12 pounder on a Red Devil tube fly at Beck End. Also at Beck End John McClay landed a 14 pounder on a Flying C. On the Carr Nook beat Geoff Stainton landed a 10lb fish on a Flying C in Lucky Hole. Alan Sefton landed a brace; a 10 pounder at Addison’s Bank and a 7½ pounder in the Willows on Flying C’s. Paul Hirst used a yellow belly Devon to land a 10 lb fish at the Fence End. On the Yorkshire Fly Fishers water at Wetheral Geoff Cowburn landed three at Island Foot, two of 12lb and one at 16lb. Peter Wrigley had a brace of 12 pounders. Guest Mitch Manage caught his first ever salmon at 9lb. Ian Cohurn landed an 8 and a 14 pounder and Tom Herd caught a 12 pounder. At Warwick Hall over the last week there has been 14 salmon caught and returned, 3 anglers landing a brace of fish each on Monday with Pete Johnston landing a 15 and an 8 pounder. But Tim Bacon went one better on Tuesday when he landed a 7, a 10 and a 15 pounder all on spinner at the Otter Stone. Report courtesy Chris Bowman. 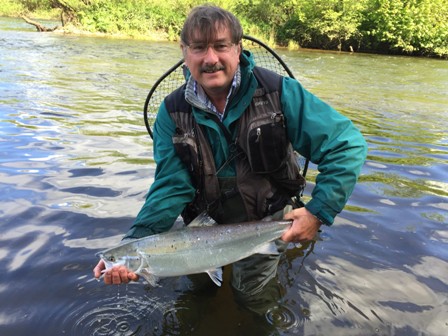 Dave Bamford who with his friend Phil on the Eden last week hooked nine fish between them and landed four!