It is not often with the weather patterns we have had over the last few years, where we get one of those idyllic autumnal day’s. A slight warm breeze from the south-west, the river at summer low, a thin milky overcast sky that you could just see the sun shining through and the day gradually warming. I had the pleasure and good company of Les, a first timer into fly fishing joining me on the lower Eden. While having a chat about various piscatorial things and a coffee, we saw much activity with many fish moving on the surface which is very encouraging for someone about to start fly fishing! 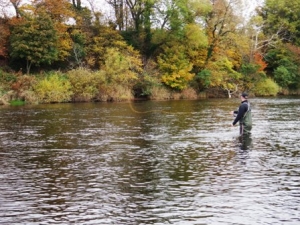 It was not long before Les had got to grips with the fly casting, within the hour he was good to go, armed and dangerous. 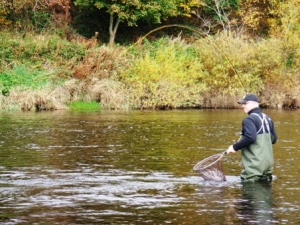 On the third cast, a very fresh and bright herling, followed by a few missed takes and on and offs. 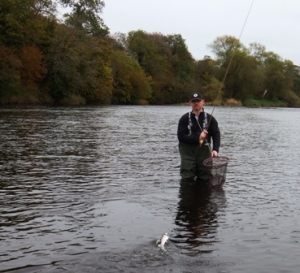 Les did a great job of playing and landing his fish. 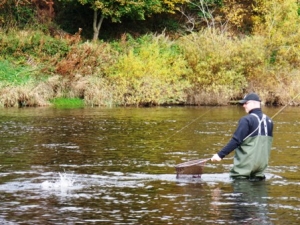 Fishing a small PTN and now controlling the presentation of the fly better, Les now had hold of what we came for. 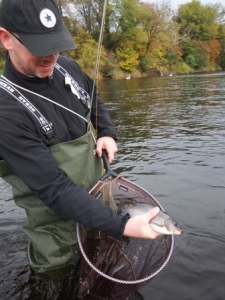 Throughout the day we did see an enormous amount of very big brown trout show and there were also some sea trout among them. It really was one of those unusual day’s to see so many decent fish showing, especially at this time of the year. During the afternoon several salmon decided to join in, there were many coloured fish, but one or two silver double figure ones also. All in all, a very enjoyable day with great company (Les has now come to the dark side!), to see and confirm the stamp of large trout that do exist in some of these Eden pools. 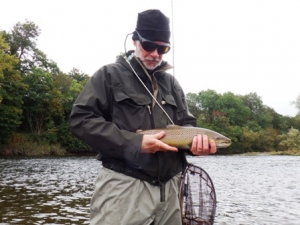 A nice brown trout caught at the very end of the season this year on the lower river by David Richens.