We had a great time at Warwick Hall today August 1st with good friends Steven and Billy. On arrival the water was at a perfect height and with fish moving through the beat. As the morning wore on the level rose slightly and much colour came in from last nights heavy rain and the fish just did not want to know. But there was some superb Spey casting to witness and at least the water was covered thoroughly and all in nice weather. 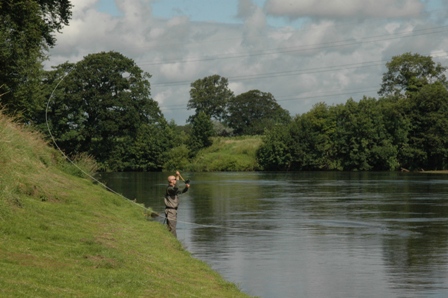 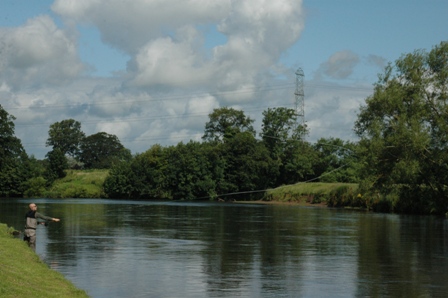 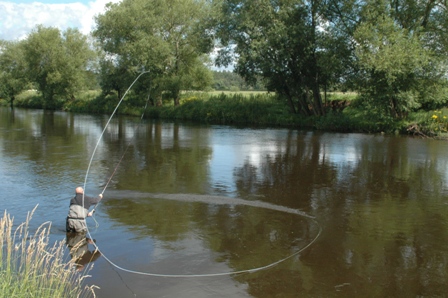 Steven with some smooth casting. 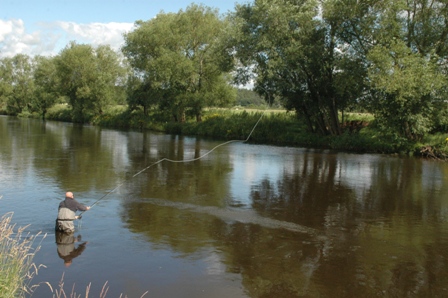 A snap shot of July on the lower river.

July began at minus eight inches below summer level on the gauge. Good salmon and sea trout numbers on the lower river and fishing has been productive. Strong south-westerly’s are still prevailing and often with heavy localised showers. Night fishing is excellent for both brown trout and sea trout when there is cloud cover that holds the temperature and the wind drops.
A rise of water on the 9th after rain the day before of one foot with a little colour. There are fresh fish entering the Eden with the lower sections of the river doing quite well to all methods.
July 19th.
There has been a run of salmon over the last week on the river Eden with several beats on the Lower River reporting numbers of grilse moving upstream. At Warwick Hall last Tuesday Raymond Chessworth fished a shrimp in the Gravel Bed and landed a 12 pounder. On Wednesday there were two salmon caught; Andrew Robertson landed a fly caught 7 pounder in Coops Stream and Tim Bacon fished the Nunnery with a spinner and landed a 12 pounder. Downstream of Carlisle Garry McDonald landed a 15 pounder on the fly, Garry’s fish measured 33 inches nose to fork of tail. Another fish from the Lower Eden was an 8lb grilse caught by Mick Archer using a spinner. Lower river at summer level with heavy peat stain, middle river clear.
25th,
At Warwick Hall on Sunday both Colin Hudson and Warwick Hall keeper Charlie Alderson landed fly caught 11 pounders in the House Pool. Monday saw Les Routledge land a 9 pounder in the Rushes and Tom Jenks a 4lb grilse in the House Pool. Both fish were caught on the fly. Prior the river Eden rising quickly on Tuesday following 48 hours of rain there were plenty of salmon moving, Tim Bacon landed a brace in the Rushes; one 8lb the other 4lb, both caught on spinners. The keeper was also back in action with Charlie Alderson landing an 8 pounder in the Rushes with a spinner.
The river rose a couple of feet during the day of 28th with the heavy rain that went through the county. The water is thick with peat on the 29th and one foot six dropping to one foot on the 30th. There are still sea trout entering the river around the one to two pound class along with herling, but not the bigger stamp of four to eight pound fish that came in May, June and early July.

River level on the last day of July is at five inches above summer height and 14oC with a peat stain. A few salmon caught today on the lower river two from Dave Bamford and the trout are starting to come on again. Big tides this week with a full moon, the water needs a little more clarity for night fishing to recommence for both brown and sea trout fishing.