Very warm, bright and humid weather over these last few days along with low water levels is not always the best or ideal conditions for daytime fishing, you would think. But not only is it a pleasure to be out enjoying such weather and in great surroundings, there are the moments when for some reason the fish come on and if you happen to be in the right place at the right time, sport can be very good. At present despite the river levels, the water temperature is still on the cool side of too warm compared with other rivers and this has to be a positive factor.

This is the second fish for Kevin Edwards in three days off the lower Eden. Choosing the right time to fish before the tide floods and after the tide has ebbed can be very rewarding for salmon and sea trout, there is also much trout and grayling activity on the river as the tide peaks and comes to a standstill. 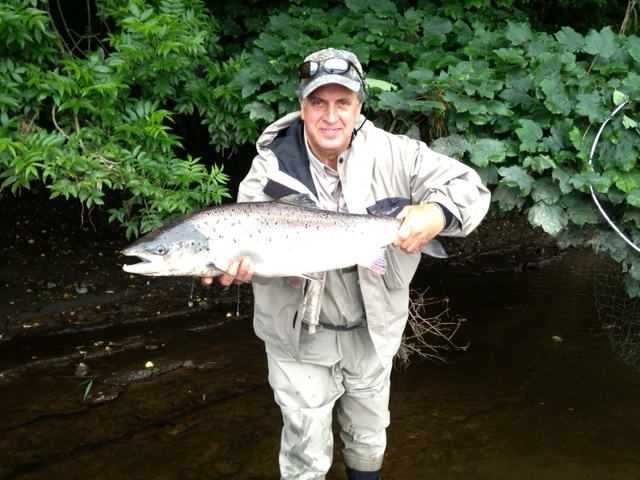 Kevin with a fresh fish of twelve pounds.

Sea trout and there are quite a few about on all the Solway rivers this summer often precede the salmon on the tide by as much as two hours sometimes, during the daytime and especially when the river is at summer level and below. Stealth is definitely the order of the day, stay well back and low from the run you are to fish and tread lightly. Lighter tackle is now needed for both sea trout and salmon. Five or six weight outfits for sea trout, six or seven weight lines for salmon, they are less disturbing than the ten and eleven weight outfits and you can now drop down leader diameter to accommodate the much needed smaller flies, size fourteen and even sixteen work very well.

The action is very good on dusk with the brown trout, there have been some real special fish caught of late to both nymphs and sedge flies, some of the bigger trout that you do not often see during the daylight hours are very active then. 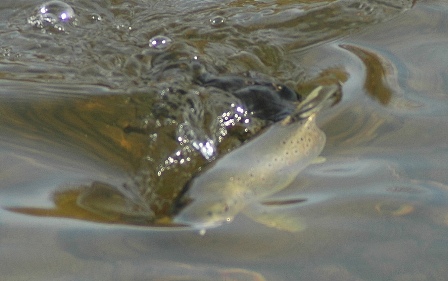 Chris Bowman and I managed a couple of hours fishing into dark last night, it is always good to spend “non-working” time on the water with friends. It was one of those evenings where the cloud cover had kept the air temperature in double figures, just perfect! As the light faded around 10pm and the swallows turned into bats, brown trout began to enter the shallows and feed on the minnows that were once safe there in the daytime and also rise to the numerous sedge that were coming off. It was just nice to sit and observe all that was going on around us.

It was very tempting to have a few casts during that busy spell, but tonight it was sea trout night and we had plenty of Borderlines business and other matters to talk about. I also wanted to try a John Norris 9’6″ Pro 3 seven weight I had just got (which I must say was impressive, performed above expectations, was light, cast a very nice line and handled fish beautifully).

11.15pm and enough light had gone to make a start, the full moon was shrouded behind clouds, (big clouds I might add) and we both slipped quietly into the tail of a pool. The second cast and a fish on which came off after a lot of leaping a minute or so after. This was swiftly followed by another take which turned out to be a big grayling, it had taken a size six single! One or two more pulls and a two pounder going through the pool and with the odd good fish showing, things were shaping up nicely.

There was the odd rumble of thunder in the distance over the Caldbeck area and a little sheet lightning, maybe it will miss us. Within twenty minutes a cool wind got up and there was lightning all around, bolts going both vertical and horizontal with the whole sky illuminating. By now it was getting a little too uncomfortable! A good fish on around four pounds was lost at the tail of the pool probably due to the distraction, followed by a fish of two and a half pounds landed and returned the very next cast, can you catch fish during a thunderstorm, I guess yes is the answer?

Here is the dilemma, do you carry on fishing while the fishing is good, “make hay while the sun shines” or be blown to bits by lightning? The next five minutes was decided for us, it was all too close for comfort, with the rain, the lightning and the wind, we headed back to sit in the car and wait for it all to pass. I cannot remember witnessing such an intense and varied light show, it was just incredible and we had a front seat! 12.45 we managed to get back in the pool and miss one good pull and whip one more out at two pounds before the tide finally hit and the water level rose to a standstill along with a bright full moon. I have never been happier to see a tide as then, as we packed up the torrential rain, wind and lightning returned with a vengeance, what a night, time to go home.