Had a great time in Wales sea trout fishing last week, did not manage to get out the first two days due to high and coloured water but had some fantastic sport on the last night. A seven hour drive back on a very congested M6 was not the greatest of pleasures and kind of took the shine off things!

Below the river Irthing the Eden has remained very peaty after the small rise of water from heavy showers in the week which can often spoil the fishing, the river now needs a good flood to clear that out. Fishing into dark for brown and sea trout when the conditions are like that can be very disappointing until the water clarity improves somewhat. The river levels are now back to just above summer height and with the unstable weather conditions hatches are sparse and the trout and grayling fishing not always certain. There are still many salmon and grilse entering the river off the tides which is good news.

We struggled yesterday and the middle river where the water was clear, the fish were certainly there but were taking short, nips and plucks, no matter what we tried just could not get a solid connection. 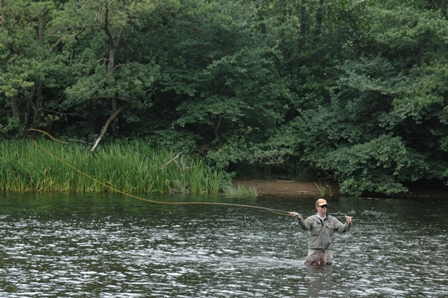 Bob from the north-west States.

All the same it was a very enjoyable day to be on the river deep in the valley with good shelter from the persistent wind that seems to be so prevalent this year. 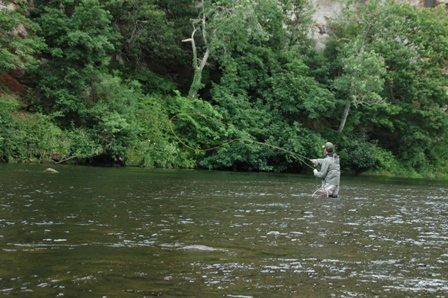 There has been a run of salmon over the last week on the river Eden with several beats on the Lower River reporting numbers of grilse moving upstream. At Warwick Hall last Tuesday Raymond Chessworth fished a shrimp in the Gravel Bed and landed a 12 pounder. On Wednesday there were two salmon caught; Andrew Robertson landed a fly caught 7 pounder in Coops Stream and Tim Bacon fished the Nunnery with a spinner and landed a 12 pounder. Downstream of Carlisle Gary McDonald landed a 15 pounder on the fly, Gary’s fish measured 33 inches nose to fork of tail. Another fish from the Lower Eden was an 8lb grilse caught by Mick Archer using a spinner. 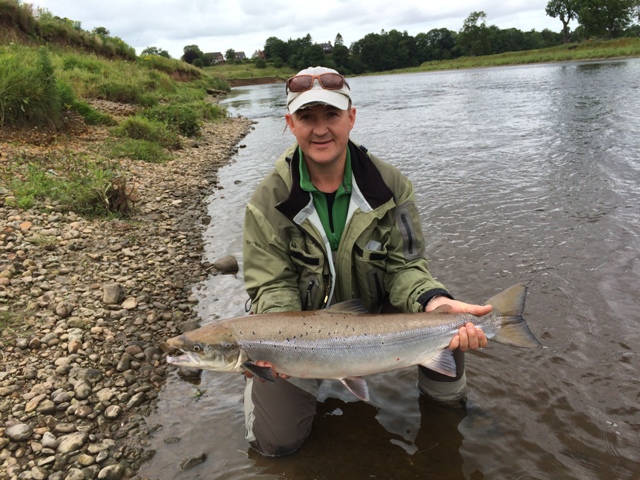