The weather is settled and the water level at summer level and clear, not the best scenario to hook up with a salmon just yet especially in the middle of the day, not at least until the next rainfall! Put the salmon out of mind for a while and concentrate on what else is available on our beautiful river. I had a few hours spare this afternoon and promised to give Tom Bell’s zero weight nymph fly line a good go as the water conditions were smooth, very clear and the day windless, an ideal opportunity for these sort of things. I fished the pool through first with a nine foot five weight set-up, fourteen foot leader with a weighted PTN on the point and a size 16 snipe and purple on the dropper, missed four or five fish on the way through and landed three grayling and a brown trout. Not bad in those conditions in the middle of the day I suppose, but trying to get the fly line to land without making a mark and make mends gently was always going to be an issue the way things were. I guess that we do not always appreciate just how easily spooked fish can be when we cannot sight them in the water with that great hawser snaking around in the surface film at times. 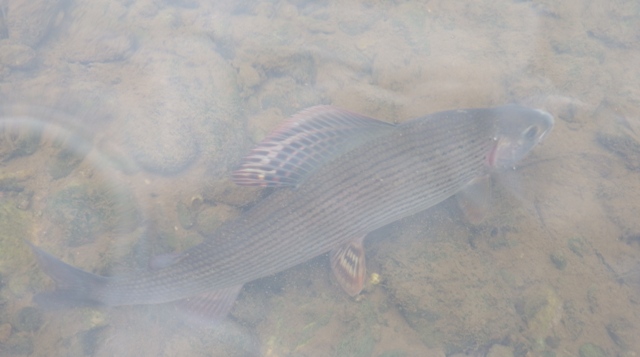 I then put up a ten foot five weight rod with the nymph fly line and the same leader set-up. Casting a weightless line is never going to achieve any serious distance, but all I am looking for is around twenty five feet or so. The line was designed mainly I am guessing for the weighted nymph dapper (Czech nymphing style at short range style and the competition angler). But I wanted to have a little more distance than that on this occasion to cover the fish in the situation given and so had to overhead cast which actually worked quite well with a sharper stop, as long as there was a weighted nymph on the point to turn the leader over and carry the light dropper.

The fly line landed with no disturbance whatsoever, I could make mends to control the flies again with no surface tension being broken and not disturb the end of the fly line due to the ultra thin diameter of the line and the leader which was nail knotted to the fly line. Where as I normally watch the end of the fly line for any unusual movement as it swings around, on this line, the whole fly line moved even on the most subtle takes and every take was also positively transmitted to the finger, something you don’t always get on a five weight. The take rate had easily quadrupled from the last run down, I was seeing and feeling every take and missed so many which shows what is actually happening under the surface that we cannot always detect. On that run through the pool it resulted in over forty fish landed, brown trout, sea trout and grayling up to near two pounds and as many missed or on and off, I must say that I was duly impressed and actually wanted to stop fishing!

I am not easily impressed as most will tell you, the big question and my dilemma is now, do I want to go back to way I used to enjoy and fish in those sort of conditions? I am not a fan of leader to hand or Tenkara as they have serious limitations and I certainly have never used bite indicators, but this is just far enough away from all that to be still fly fishing in the true sense. I am seriously sold!

Is Tom getting that prototype fly line back……….. ?