After the rise of water from the rainfall on the 3rd, the Eden on the 4th has now dropped to around six inches above summer level with a light peat tint. There have been several fish reported caught this first week of the month on the lower beats, both grilse between four to six pounds and salmon in the teens. Most of the fish that have been waiting to run for weeks in the lower pools of the Eden have now lifted upstream which will be very welcome with the beats on the middle river.
There were still quite a few fish seen moving through on the 8th and some anglers that were out had good sport that day to most methods. With the remnants of the hurricane Bertha heading this way, heavy rainfall had put the river levels up drastically that evening making the lower river out of sorts until the 10th. More heavy rain the evening of the 10th had put another three feet rise of water into the river overnight making the 11th unfishable. This rise of water although not convenient for anglers fishing was very much needed, it will flush the river from ten weeks of accumulation of all the bad stuff a river does not need and spread the salmon upstream.
I would like to think that now the salmon are running, that anglers who are fortunate to catch these beautiful creatures are willing to put back as many fish as possible voluntarily to protect the future stock before it becomes compulsory. 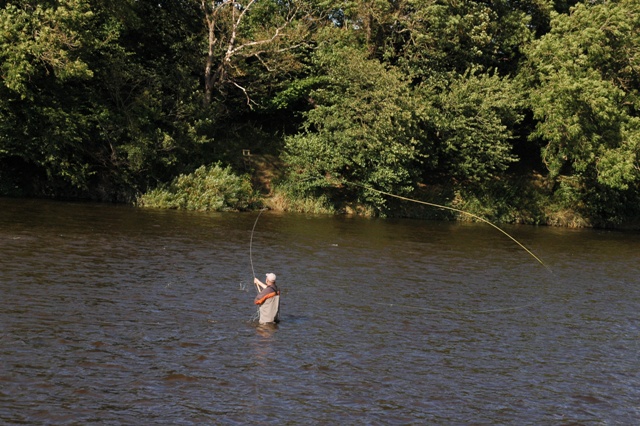 Out with my very good friend and fellow AAPGAI member Bert Schaaf from Germany last week. Bert was fishing the lower Eden on Friday and got a beautiful ten pound salmon on the fly with long tailed sea lice which was quickly returned. Bert was also a great help at the Lowther Show this last weekend, more of that later.