The first two weeks of July, the river level still remains below summer height with the extended dry and warm period. The water quality is very good considering and around 64oF during the daytime, the weather and wind direction is mainly from the west. There are good numbers of grayling in the lower stretches at present and are very obliging to most fly methods. 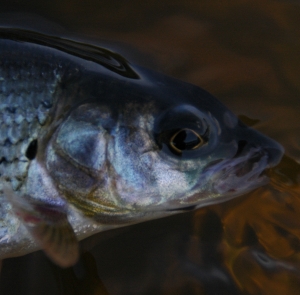 The brown trout fishing to both wet and dry fly is fair to good during the daytime, but on dusk and into dark it is just phenomenal with most fly patterns working. 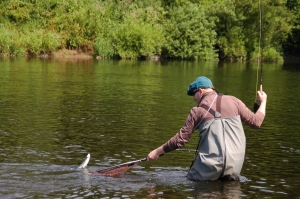 Some very good brown trout specimens and the odd sea trout to two pounds making an appearance on dusk. Those who are willing to fish on a little later in to dark and use bigger flies with a black wing are rewarded with sea trout up to five pounds, with most fish around the two and a half to three and a half pounds. There is excellent insect activity during the dusk period with the fish taking freely on the surface, skating sedge patterns are effective. 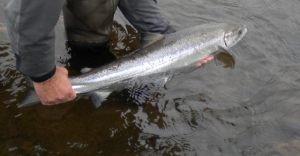 Salmon continue to nudge in to the lower river and with the big tides from the 11th of the month which gives them easy passage through the lower runs to further upstream. There have been a few salmon caught and lost this early part of July to fourteen pounds, a few grilse size fish have been seen running.

Rain on the 19th hopefully will put a little fresh in to the Eden and get some fish moving to the middle beats.