The river levels have remained at around summer height this first two weeks of June, this has encouraged some good numbers of sea trout averaging two to three pounds to enter the Eden with some larger fish amongst them and they are populating the lower sections. If the evening remains overcast and the wind eases a little holding the air temperatures up, sport can be very good. This week the wind has been coming from the north-west and the fishing conditions in the dark have not been ideal although there have been sea trout caught. Fishing a floating line with a slow sink poly leader, a dropper with a size eight and point fly size six single with a black hair wing on ten pound B.S with slow retrieve is proving quite effective.

The brown trout fishing during the day is coming in fits and starts, good activity on the surface for a short while then the fish go down for a period, be there at the right moment and the fishing is frantic. Size fourteen Adams, Klinkhamer and Greenwells all working nicely on the top and north country spiders effective sub-surface all on long leaders of at least twelve to fourteen feet during the daytime. Those who are willing to fish into the dusk are having tremendous action with some of the bigger trout, good hatches of sedge in the late evening, elk hair caddis works fine.

Now the water levels are lower compared to the levels in May the Eden had, the salmon are reluctant to run far upstream during the daytime especially when the day is bright. There are fish still coming in with the big tides this week and they have been seen just before the tide hits the river. Nonetheless there have been a few fish reported this week and a few fish lost, fishing the deeper and the faster runs proving to be the way forward. At Warwick Hall during the last week Ian Shaw landed a fly caught 10 pounder from the Otter Stone. Last Friday Simon Artley caught a 7 pounder on a spinner in Howards Hole. 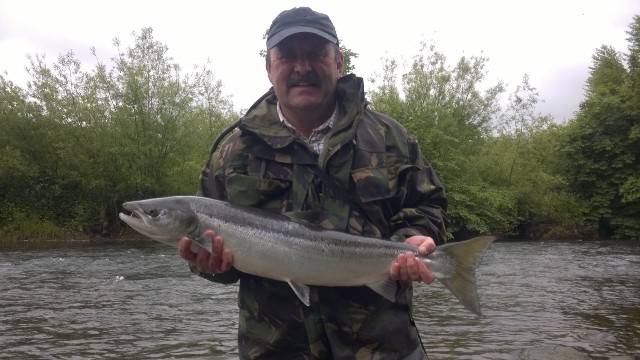 Also at Warwick Hall on Wednesday Ian Pincombe caught a 9 pounder on the fly and David Bamford landed a 7 pounder. Further up river Stan Lane landed a 15 pounder at Salkeld and Anne Woodcock at Eden Lacy a 10 pound fish on the fly a size 14 Francis.